The Okemah Public Schools Board of Education made the decision to keep in place its current campus leaders — in spite of an ongoing search for a new superintendent — Monday, February 11, at a regular meeting of the school board. 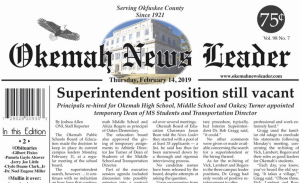 The superintendent search, however … it continues with no indication on how long that continuance may be, according to school officials.

The education board also approved the giving of temporary assignments to Athletic Director Joe Turner of Dean of Students of the Middle School and Transportation Director.

Vick, Lambert, Rogers or Turner were named on the agenda, only “Discussion, consideration and vote on … hiring high school principal … principal of middle school … principal of elementary … (and) temporary assignments of Dean of Students of the Middle School and Transportation Director.”

Part of the executive session agenda included also discussion into possibly entering into a contract with “an individual to serve as superintendent of schools.”

The wording of the agenda item certainly leads to well-based speculation that the school board has their search down to one candidate after a series of interviews over several meetings.

Okemah Board of Education Chairman Jason Bean told the News Leader they started with a pool of at least 33 applicants — a list, he said has thus far been narrowed down by a thorough and rigorous interviewing process.

No candidate names have been released by the board thus far, despite attempts at asking the question.

Upon reconvening from the closed-door-session, the board decided to take no action on the superintendent contract.

The agenda item was not tabled, meaning it does not have to be revisited or reappear on the next meeting agenda, as required by parliamentary procedure, typically, but Interim Superintendent Dr. Bob Gragg said, “It could.”

No other comments were given or made available concerning the search for a superintendent or the hiring thereof.

As for the re-hiring of Vick, Lambert and Rogers in the three campus leader positions, Dr. Gragg had only words of positive reinforcement to offer..

“I think they make a very good team,” Dr. Gragg said. “I’ve enjoyed getting to know them and work with them.”

“Each one has a little bit of different background and different things to bring to the table,” he continued. “They are always professional and work extremely hard.”

Gragg used the familiar old adage to conclude his statements following Monday’s meeting, concerning the re-hiring of Vick, Lambert, Rogers and their roles as good leaders for Okemah’s students.

“Each day, you know, you’ve heard the old saying, ‘It takes a village,’” Gregg said. “(Those three, Vick, Lambert and Rogers) live that each and every day for the students here at Okemah (Public Schools).”

More information will be reported as it is made available concerning the search for the new Okemah Public Schools superintendent.

Sales and use tax revenue up for city, down for county in August

Summoned for jury duty? Report to the fair barn, not the courthouse