The case of the State of Oklahoma v. Anthony Spain was passed once more last week, continuing the accused murder defendant’s preliminary hearing to next month. 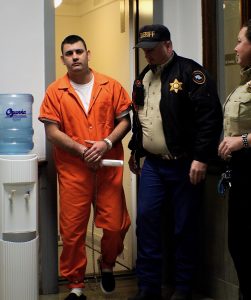 Anthony Spain, accused of the first-degree murder of his mother-in-law, is led into the Okfuskee County District Courtroom Thursday, Feb. 14 in Okemah. (Joshua Allen/ONL Staff Reporter)

Spain, who sits accused of killing his mother-in-law with a shotgun during what allegedly became a violent domestic dispute, was led into the courtroom prior to the hearing, solemnly standing before the judge in an orange jumpsuit and chains binding his hands and ankles.

Okfuskee County Court District Judge Lawrence Parish resided over the proceedings Thursday, February 14, at which time he made the decision to pass the case after the prosecution, led by Assistant District Attorney Emily Mueller, informed him that the discovery process was not complete.

Spain will appear again, tentatively for his preliminary hearing, on March 7, giving a few more weeks to the information-gathering phase.

“(The case) was passed to that day because we are still going through the process of getting (reports) shared between us,” Mueller said.

Discovery is a pre-trial procedure of common criminal law where the prosecution must make known to the defense the evidence it has against the defendant.

Thus, before the preliminary hearing phase and subsequent trial, all law enforcement reports, interrogation information, medical examiner reports and other pertinent documents are shared between the two parties for review.

Discovery can be a grueling, time consuming process, according to Mueller.

“This process of getting all the reports in (and shared between the State and defense) takes a lot of time,” the prosecutor said.

That being especially the case if needed reports are not available or complete.

Reports from the Oklahoma State Bureau of Investigation and State Medical Examiner’s Office, for example, had not been submitted by the time of the last hearing, January 31, leading Associate District Judge Maxey Reilly to pass the case to the most recent February 14 date.

That remains the case.

Mueller said Tuesday of this week they still await some of those reports, again noting, “This part is probably going to take a while.”

Spain’s defense is headed up by attorney Curt Allen, who thus far has represented the defendant at each hearing. However, Allen was not present at Thursday’s hearing, furthering the need to continue the case.

Court personnel cited the reason for his absence as a family emergency, leaving out the details.

More to come about this story as information is made available.