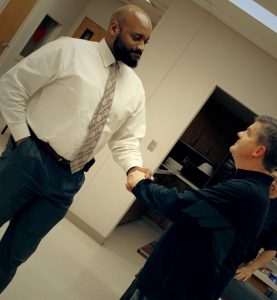 High School Principal Lee Vick shakes the hand of Okemah Board of Education President Jason Bean after accepting an offer to be the district’s new superintendent. (Joshua Allen/ONL Staff Reporter)

It took some time to make a decision, but the search is over … and, while the Okemah Board of Education cast a large net with a third-party search firm to help find the best candidate, in the end, the one the board picked was close to home.

Unanimously and after a little less than an hour in an executive session Wednesday, the board voted to extend the offer of employment for the top administrative position in the district to Okemah High School Principal Lee Vick.

Vick will take over at the helm of Okemah’s schools in the wake of the retirement of Dr. Bob Gragg.

Vick, an Okemah High School graduate, chose not to make an official comment after the meeting, stating he would “later,” giving himself time to “take it all in.”

The board did not indicate at the meeting who would be replacing Vick as the high school principal.

More to come on this story as the information is made available. Check www.okemahnewsleader.com for updates.