To go for prelim hearing in March; DPS releases statement after recent indictment

An Oklahoma Highway Patrol Captain is embroiled in scandal after a recent felony indictment was handed down by a multi-county grand jury, alleging the troop commander attempted to blackmail an OHP Commissioner. 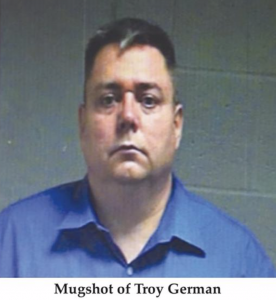 According to Oklahoma County court records, Capt. Troy German will go before the court for a preliminary hearing conference, which has been set for March 12 at 1:30.

Most recently, German was serving as commander of Troop D, which covers Okfuskee County and five other adjacent counties.

It was reported in December of last year that German had allegedly met with OHP Commissioner Billy “Rusty” Rhoades on multiple occasions that fall where he allegedly attempted to threaten the commissioner with the exposition of information regarding “improprieties in the promotional process within the agency,” according to a statement released by the Oklahoma Department of Public Safety.

German included two other OHP officers, Colonel Michael S. Harrell, and Captain Brian Orr, in his blackmail attempt. However, neither Orr or Harrell are facing criminal charges or any other administrative action, the recent DPS statement reads.

Orr is an Okemah native. He now serves as Captain of the State Capitol Security Patrol.

According to a social media account of German, he has been with OHP for over 20 years and has often been a teacher and speaker at several law enforcement events.

Despite the felony indictment, German is not being held in custody, pending further court proceedings, but he is on paid administrative leave from OHP.

“The Oklahoma Department of Public Safety and Oklahoma Highway Patrol are thankful for the hard work of the citizens serving on the multi-county grand jury that handed down the felony indictment for blackmail against Troy German yesterday evening.

“The indictment of Mr. German is the culmination of a thorough internal investigation by the Oklahoma Highway Patrol into not only the blackmail allegation by Commissioner Rusty Rhoades, but also a rigorous and comprehensive inquiry into all statements and evidence provided by Mr. German regarding alleged improprieties in the promotional process within the agency.

“OHP cooperated fully with Attorney General Mike Hunter and his staff in their independent review of the internal investigation, and fully supported the decision to escalate the matter to the grand jury.

“The conduct of Mr. German and the actions of other members of the Patrol who condoned or colluded with him are wholly inconsistent with the Oklahoma Highway Patrol’s core values of honesty, loyalty, integrity, respect, self-discipline and professionalism.

“The Patrol holds all employees, whether sworn law enforcement or professional staff, to the highest personal and professional standards, and can assure the public that all those who have violated our standards of conduct will be held accountable without delay.”

More information to follow concerning this story. It will be reported as it is made available.