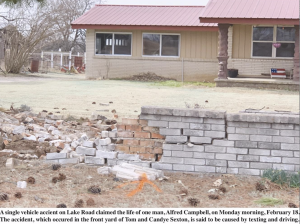 Emergency responders were called to a single-vehicle accident Monday morning where one man was pronounced dead at the scene, according to a report from the Oklahoma Highway Patrol.

The report said the wreck occurred about two miles north of Okemah on Lake Road in Okfuskee County.

When Troopers arrived on scene, a 2006 Hyundai was found turned onto its driver’s side after striking a tree.

The vehicle was found to be driven by Alfred Heitner Campbell, 45, of Village, Oklahoma.

Investigating Trooper Scotty Hart said the vehicle was southbound on the county road.

“Evidence indicates the driver was texting, ran off the road, hit a three-foot brick wall, continued southbound, coming to rest on driver’s side and struck a tree,” Hart said in his report.

Hart cited the condition of the driver to be “apparently normal” and put the cause of the collision as “other, driver inattention.”

The Trooper also noted Campbell was not wearing a seatbelt. The report indicates the weather was clear.

Hart was assisted in the investigation by Troopers David Brown and Scott Aldridge of the Seminole County Detachment.

The report of this accident is based on the “troopers investigation of the collision,” the report states, concluding with, “It may contain the opinion of the trooper.”