In a recent hearing in an Okfuskee County District Courtroom, a not guilty plea was entered on behalf of defendant Edmond Warrington for the first-degree rape that allegedly occurred in May 2018. 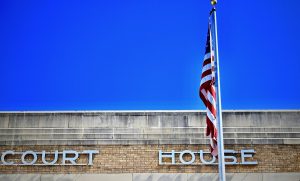 Currently, the defendant is not in custody and out on bond.

Warrington is accused of raping his then-17-year-old niece on some property he owned while she was out riding four-wheelers.

During the preliminary hearing that bound the defendant over for trial, the victim’s father testified to walking up on the incident, saying he saw Warrington “with his pants undone” and his daughters “legs inside the truck” where the alleged rape took place.

The Okfuskee District Court set his bond at $100,000, which Warrington posted on May 15 after being arrested shortly after the incident and spending three days in the county jail.

Warrington’s case continues making its way through the court process.

The prelim conference was held in November, followed by his arraignment hearing December 12, 2018 where a not guilty plea was then also entered, and it was set for disposition on January 23, 2019.

That disposition hearing resulted in a continuance after Warrington’s attorney, Elliot Zac Smith was not present, but by phone requested it be continued due to him not having received the preliminary hearing transcript. The court obliged and moved disposition to February 20 in District Judge Lawrence Parish’s District Court, where the case will be settled either by jury trial or plea.

Prosecuting for the State is Assistant District Attorney Emily Mueller.

That disposition hearing saw Warrington stand mute, saying nothing to the judge’s request again for how he pleaded in the case, so the court again entered a not guilt plea and set disposition for March 27.

In legal terms, disposition is where the court will make its final determination in the case before setting a date for a jury trial. A plea agreement could still be reached at some point during this time.

Initially, after the preliminary hearing, Warrington was charged with first-degree rape and incest. The incest charge was due to the defendant being married to the sister of the victim’s father and technically the young girl’s uncle, but an amended information filled in December saw that charge removed.

He now faces only a first-degree rape charge, the amended information showed.

According to court documents, rape in the first degree is “punishable by death or imprisonment in the State Penitentiary, not less than five years.”

Warrington will remain out on the current $100,000 bond, pending further court hearings.

The News Leader will follow this case throughout, so check www.okemahnewsleader.com for updates.