For the third time in as many months, Dustin Danker’s employment has been the subject of the executive session. During the January 14, 2019 meeting, the agenda item was to hire Danker on as the full-time City Manger. However, the council felt Danker was not quite ready and voted not to hire him by a 2-3 vote. 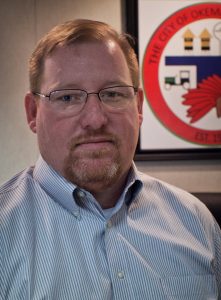 Danker was again the topic of discussion during executive session at the following meeting, January 28. This time the council voted to give Danker a 9.2 percent raise after four months as Interim City Manager. Danker went from making $49,400 as Water Plant Supervisor to $54,400 when he became Interim City Manager to finally making $59,400, giving him a 20.2 percent raise since September 2018.

At the City Council meeting Monday night, March 11, the proposition of hiring Danker as full-time City Manager was once again on the agenda to be discussed during executive session. During the public appearances, Code Enforcement Officer Jason Ishmael spoke to the council in favor of hiring Danker. Ishmael relayed to the council that he has worked under three city managers, and, in his opinion, Danker has done far beyond what the council expects from a city manager. He told the council that he thought Danker would be a good choice and has treated the employees fair thus far.

The council entered into executive session at 6:42 p.m. and returned into open meeting at 7:15 p.m. Vice Mayor Wayne Bacon made the motion to hire Danker as full-time City Manager based on a contract that was to be determined at a later date. Anthony Landers seconded the motion. This time the council voted to hire Danker with a vote of 4-1. Ronnie Lucas voted no saying, “it’s still a no from me, for now.”

Mayor Mike Fuller, during the city council comments, congratulated Danker, wishing him the best and asking him to stay full throttle and that he had the support of the council in every endeavor.