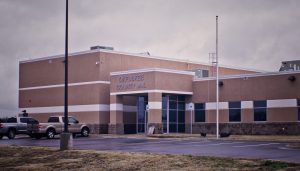 The soon-to-be new Okfuskee County Jail is one more step closer to being taken over by the sheriff’s office, successfully passing an inspection by the State Fire Marshal after a few failed attempts.

Rasmussen’s Office will now continue going through its specific checklist within the jail to ensure it is ready, safe and sufficient to house prisoners, which is a process currently ongoing.

The sheriff told the Okemah News Leader just before press time Tuesday that the issues have now been dwindled down to some plumbing problems, issues with a couple of doorways and a few minor lighting concerns, which he said are all currently in the process of being fixed.

“Once we feel the jail is ready for occupancy, we call in the (State) Jail Inspector to do the final inspection before we take it over,” Rasmussen said.

The contractor in charge of the project told Rasmussen sometime last week the problems would be fixed and the new jail ready by the end of this week, but the sheriff expressed skepticism in that assessment.

“It’s hard to put a time on it, but I don’t think it will be by the end of this week,” he said. “It’s getting close and should be completed soon.”