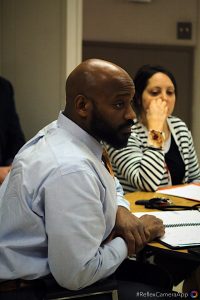 After the decision was made last month to hire Okemah High School Principal Lee Vick as Superintendent of Public Schools, the school district left a soon-to-be vacancy in the administrative leadership position of the high school.

Whereas, that may be the case, the high school is not currently without its leader, as Vick will maintain his duties in the position to complete this school year, while learning the ropes of the superintendent position and working alongside Interim Superintendent Dr. Bob Gragg.

At the Board of Education’s most recent meeting, School Board President Jason Bean said the search for a new principal was being overseen and conducted by the interim and future superintendents, kindly refusing to make a comment and deferring to them.

According to the supers, it was somewhat early to say, but as of Tuesday, Vick told the Okemah News Leader that the search is going “very well.”

“Several applications have been submitted,” he said.

The names of the applicants were kept confidential, so as not to affect the selection process. However, Vick did indicate at least some of the applications are from other districts.

“We will start doing interviews in the near future,” Vick said, keeping “near future” rather ambiguous and not indicating a specific date.

Since this school year is not far from completed, Vick said he will remain in the capacity of high school principal and training superintendent.

“I am going to be here, as principal at the high school, until the end of the fiscal year,” he said — that pending the board selects a candidate and votes to approve a contract with whomever that person may be.

Vick said he thinks the board and himself and Gragg will find someone by the end of the fiscal year (June 30).

“My plan is to get the position filled with the best candidate as soon as possible,” he said.

Vick explained that he will continue working as the principal of OHS, noting he will also be working and learning (as the future superintendent) throughout the summer.

I won’t be taking a break (this year),” Vick added. “I just want to do the best I can for this school district, the Okemah Community and our kids. I will be working hard, preparing for the coming year.”

Already Vick said he has been a big part of the planning for the next school year, making important decisions in personnel and planning the calendar for the district.

More on this story will be reported as details are made available.