The City of Okemahʼs Tuesday election saw a rather steep upset in the races for two City Council seats as both incumbents were ousted, making way for Ron Gott and Kelly Robertson West to take over in the Ward 3 and Ward 4 seats. 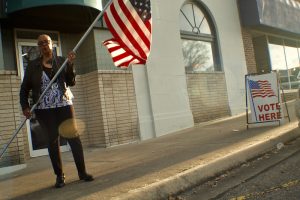 The two incumbents in the running were Loren Aldridge and Anthony Landers.

As the election results were unofficially tallied, each of the precincts began reporting to the Okfuskee County Election Board shortly after the polls closed at 7 p.m.

By that time, though, it seemed clear how the results were going to come out.

At about 7I15 p.m., at at least two of the four precincts, Gott and West were ahead by staggering margins.

The third and fourth precincts to report made room to call it, ending the race and the terms of the two incumbents.

West received 58.82% of the vote, equating to 210 of the 357 total votes cast, according to the Oklahoma State Election Boardʼs unofficial results, tallying 4 of 4 precincts completely reported, as well as absentee mail-in ballots.

Though technically these results are unofficial as of press time Tuesday, the totals of the precincts and absentee ballots are complete, meaning the results of the

That said, however, the state election board will not add provisional ballots to the counts until Friday after 5 p.m., according to the election board, hence the use of unofficial before results in this article.

This was the first election for both Aldridge and West. Aldridge was appointed to the council in 2017, following the resigning of then-Councilor Bobby Massey.

West was running for the first time. Sheʼll take over the seat after a swearing-in ceremony, most likely at the next regular meeting of the Okemah City Council, according to the Okfuskee County Election Board.

“I am appreciative of the confidence that the citizens of Okemah have put in me,” West said immediately after the results came through. “Iʼm very excited and ready to get started.”

The race for the Ward 4 council seat ended more like a landslide as Gott soaked up 61.5% of the citizensʼ votes, making for 224 of the 364 total votes cast.

“I will move into the council position with our citizens as the number one priority, and I look forward to doing good thingsfor Okemah, its citizens and our children and youth,” Gott said Tuesday. “I also want to thank my opponent, Anthony

Landers, for his many years of volunteering his services to our community.”

As with West, Gott will now take over the Ward 4 council seat, most likely at the next regular meeting of the Okemah City Council, though the termʼs exact starting date is pending, according to the local election board.