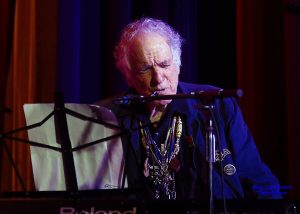 David Amram — a prolific composer, conductor, and multi-instrumentalist — performed at the 24th Annual Woody Guthrie Folk Festival. Amram’s career spans more than eight decades and includes performances with some of the greatest jazz musicians of the 20th century, including Charles Mingus, Dizzy Gillespie, Lionel Hampton, and Oscar Pettiford. Amram performed at the Crystal Theatre at 7 p.m. on Wednesday, July 14. He will also appear with the Red Dirt Rangers in Tulsa on Sunday, July 18 at 7 p.m. at The Mercury Lounge located at 1747 South Boston Avenue. (Photo provided)

Fifty-four years after his death, the spirit of Woody Guthrie, in the place he called home, Okemah, still floats through the air. It is in the wind that blows through the rolling hills of eastern Oklahoma, it is above the streets of Okemah and in the nighttime air at the Pastures of Plenty during the annual Woody Guthrie Folk Festival, but it is also in the air in places like New York City where ground breakers flock and leaders in the music and artistic communities come from around the world find themselves among the best.

New York’s David Amram is a 2021 Woody Fest performer and is one of the most accomplished composers, conductors, and multi-instrumentalists of the last century. At 90 years old, he has seen the world and played in the bands of the greatest musicians of the 20th century, including Dizzy Gillespie, Charles Mingus, Lionel Hampton, and Okmulgee’s own Oscar Pettiford, who played with Duke Ellington.

He chooses to perform in Okemah every year, he said, because of the rejuvenation he finds in the spirit of Woody Fest.

“Playing with all these young and old people is just a thrill,” he said. “Just to remind all of us that music is much more important and more mysterious, and much bigger than any of us will ever be. Our job is to try to humbly be ambassadors for that for other people. Once you realize that’s the way, instead of feeling competitive with every single person, you can sit back and enjoy it and you can learn from anybody and everybody. For me it’s a spiritual awakening and it’s based on spiritness and a whole lot of fun. You can’t beat that.”

“I read all of these stories in the Sunday New York Times about summer vacations or great places in the world to go to, way off in the Himalayas to find the Temples of Wisdom. I say you can go into the parking lot of the Woody Guthrie Festival after the whole program is over and stay up until dawn, as I often do, and find more great stuff happening than anywhere,” said Amram.

As a Woody Fest performer, Amram is one of the fortunate ones who has met the artist in person. He said it was in a New York City kitchen in 1956.

“I went with my friend a block and half from where I lived and there was Woody Guthrie sitting in this little kitchen,” he said. “We spent the whole day and night just talking and listening and playing music and hanging out with them,” he continued. “It was just amazing. Woody was an amazing person.”

Amram remembers how the Oklahoma native did not compromise himself to fit in among those on the busy streets of New York City.

“He was the first person I ever saw in New York City wearing cowboy boots,” he chuckled. “In 1956, the film the Midnight Cowboy hadn’t been made, so that wasn’t something that was considered fashionable or hip or different. He was just a wonderful guy. I met his kids later with Rambling Jack Elliott, who is still alive. And greatly influenced by Woody Guthrie. It was just such a blessing,” said Amram.

In his own work, Amram honors the spirit of Woody and the ability he had to create an atmosphere around music that serves a higher purpose. He also recognizes Guthrie’s ability to serve as a voice for those who come from simple and humble beginnings.

One of Amram’s most popular pieces This Land, Symphonic Variations on a Song by Woody Guthrie (2007) was performed by the Colorado Symphony and recorded by Newport Classics in 2015. He’s also collaborated with novelist Jack Kerouac for a groundbreaking concept that featured Jazz/Poetry readings in New York City.

Amram was inducted into the Oklahoma Jazz Hall of Fame in 2011 as the recipient of the Jay McShann Lifetime Achievement Award. He said it was during this time that he observed a wall of musicians and said he noticed Oklahoma claimed more than its share of world-renowned musicians. Some of these names included Barney Kessel from Muskogee and Chet Baker from Yale. He said it was Okemah native John Fullbright who shared the secret with him.

“I asked John Fullbright, who I think is one of the best songwriters in the world, I said there are so many talented people (from Oklahoma) ‘why is that?’ and he said the famous line, ‘it’s in the water,’” Amram said with a chuckle, then continued, “But, actually it’s in the air. You find that in places like New Orleans and other areas of the country. There’s always a group of people who keep something beautiful alive. Going back to Okemah, I don’t even know what it is, but I know that it’s there and every time I go, I feel good.”

A connection that transcends the everyday, he said, can be felt inside the spirit as music fills the air in Okemah during the four-day festival in July.

“I think it’s a celebration of that mysterious wonderful place that we call the spiritual world, which we live in, but we don’t know it. Some of the great things are a mystery and inexplicable, that’s part of the beauty. You can’t franchise and brand it and give it a slogan. You just know that’s a place you would love to be whenever possible.”

Amram has been a guest of Woody Fest since 2005. He will perform Wednesday, July 14 at the Crystal Theatre at 7 p.m., hang out until Sunday, then head to Tulsa that night of July 18 to perform with the Red Dirt Rangers at the Mercury Lounge at 1747 South Boston Avenue.