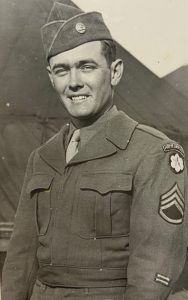 If a community is fortunate, they may have a resident like Raymond Overall. Described by Mayor Mike Fuller as a city treasure, Overall has seen the hands of time pass for nearly a century over the community of Okemah. While things have changed over the years, Overall says many things remain the same.

“It’s a community where everyone knows each other and looks out for each other,” said Overall. “It’s always been like that. It still is.”

As far as local history goes, Overall’s memory could serve as the building blocks for a screenplay if one was ever written. Overall, who owned and operated Overall’s department store on Broadway in Okemah for several decades, just celebrated his 99th birthday in June.

As the decades have rolled by, a conglomeration of memories pieced together as though one was watching the sputtering of an old home movie reel, Overall’s presence in the Okemah community is one that has become treasured and adored.

“He’s very community oriented and always has been,” said Mayor Fuller. “He’s civic minded. He’s always wanted the city to do well. He’s always done it to the best of his ability to help the city as he can. His civil mindedness and commitment to his community, we are forever in his debt.”

“I’ve known him all my life and I’ve never heard anyone say a bad word about him. He’s a city treasure,” Fuller added.

Sitting down with Overall in the home he built with his wife Betty, Overall shared many memories he has made over the years since he first moved to the little eastern Oklahoma town as a 10-year-old with his parents, Claude and Maude Overall. The family originally from Yorkville, TN picked up and moved west when Claude took a job managing a C.R. Anthony’s Co. department store in Anadarko. It wasn’t long after that before they made their way to Okemah. Claude managed a C.R. Anthony’s department store in Okemah, then later ran another called The Dixie Store.

Taking the torch from his father, Overall ran Overall’s department store for several decades in Okemah before retiring about 30 years ago. They carried men’s and women’s clothes, as Overall would say, “from the cradle to the grave.”

Fuller recalled Overall’s department store as the place to go for back-to-school shopping in Okemah.

“I’d get to go in there every year before school to get a new pair of boots,” said Fuller. “He and Betty were just so thrilled for my mom to bring me in there because apparently I was one of their favorite customers,” Fuller added with a chuckle.

A few years after returning from World War II, Raymond met Betty Earnest, whose family is from Okmulgee, and the couple married in 1951. Betty worked at Okemah National Bank for 41 years. Betty was a favorite teller for many who did business at the bank. She was known as a friendly and pleasant woman and her ability to dress and accessorize well has been mentioned by many. Raymond said Betty was also known as a skilled baker, making delicious pies. He has been without Betty for about 12 years since her passing in 2009.

“Betty and I just hit it off real well,” said Overall. “We never did have any trouble or any fussing. She was a very nice lady and everybody liked her and she did well at the bank. We always enjoyed each other’s company.”

Raymond and Betty did not have any children of their own, but they share numerous nieces and nephews. One niece, Sue Crumpler and her husband Charley, travel from Gore, OK to visit with Raymond on a regular basis.

In less than a year, Overall will reach the century mark. That hasn’t slowed him down much. At 99, Overall still drives and makes his way around town to visit with friends. He has a pick-up and a car. On a recent tour of Okemah, Overall shared his memories of places around town and where stores and other sites along Main Street used to operate.

“We used to have Dunlap department store on the corner of Third and Main. We had a J.C. Penny. We had my store. We had Aberson’s department store, who carried real nice ladies garments mostly. Her husband’s name was Max. Her name was Estelle and she ran it really well,” said Overall. “I sold my store to Elmer Frech, who had the drug store, when I retired. He operated it for a while then he finally closed it up.”

As a student, Overall started the fourth grade at Lincoln elementary in Okemah. In 1940, he graduated from Okemah high school. He attended the University of Oklahoma and has a degree in business administration.

After high school graduation, he deployed to Italy to serve his country in World War II. Overall worked in the Army Signal Corps, which focused on communications, and said his two-year stint on the coast of Italy was a very pleasant one. Overall was fortunate to not see combat, but rather his job was to install equipment that aided in communications efforts. He said he remembers topping a tower in Sicily and looking out on the horizon for “what seemed like forever.”

“I enjoyed Florence, Rome, and Naples. All of those were very interesting. We were around some of those cities all the time. I enjoyed all the time I spent in the service.”

He recalls one incident where he helped a fellow serviceman who passed out while strapped in, while both were in the air working on the tower.

“One time I was working with a guy who was a little bit of a nut, he didn’t have all of his marbles, you know,” said Overall. “We were working together. We had a ground crew. They’d pull these sections up and then we would put them in place. Put the bolts in and attach them. We were belted off with a safety belt. On one occasion, we were up at about 90 feet and this ole’ boy I was working with at that time, all at once he was out cold. I’d been in the Boy Scouts and I had studied knots quite a bit, so I knew how to tie a bolster’s chair knot. You can belt a person that way and keep them in an upright position and let them down on a rope. So, that’s what I did. I tied a rope around him and put him in a bolster’s knot and the ground crew started to let him down. He kept bumping against the tower. They just couldn’t let him down real smooth, so I had to let my safety belt loose and work myself down with him. Making sure I was safe and he was moving along safely. It’s one of those memories that stays with you.”

Overall was honored in April with 75 years of membership by the local American Legion chapter.

As for what his days look like today, Overall said he usually gets up around seven in the morning, eats a bowl of cereal, he said he enjoys visiting with friends at the Senior Center and having lunch and socializing. For dinner, he often likes to get a meatball sub from Subway. It’s “something you can sink your teeth into,” he said.

Spending time with other locals at the Okemah Senior Center is something Overall enjoys doing on a regular basis.

“A lot of it is getting together and the friendship and seeing people that you haven’t seen in a while,” said Overall. “If you want to speak to someone you can walk over and speak to them.”

Overall said he also likes spending time in the afternoons and evenings watching some of his favorite TV shows, which include NCIS and Dr. Phil.

When asked what the secret is to living a long life, Overall said, for him, he thinks it’s about taking care of yourself.

“I suppose it’s living a clean life. I never did smoke or drink (booze I’m talking about). I always worked at something. I had a farm and store. I took care of both of those at one time. I still have my farm outside of town, where I’ve worked with cattle.”

In June, longtime friends, headed by Okemah resident Mary June Mills, honored Overall’s 99th birthday with a parade that went by his home. If the community of Okemah continues in its good fortune, it will have Raymond Overall for many more years to come.