After stellar starts by both teams, the Okemah Lady Panthers and Panthers both were dealt tough losses in the final two games of the Okemah Invitational Tournament last week at the Panther Dome. 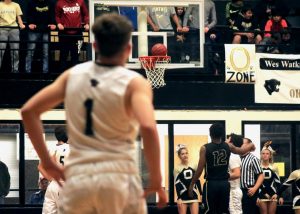 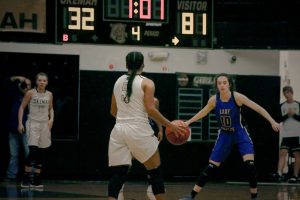 In Friday’s round two, the Lady Panthers defeated Broken Bow in a close, intense matchup that came down to a one point difference.

To the delight of fans and those cheering them on, the Okemah girls finished on top with a final score of 32-31.

Interestingly, in this one-point win, the Lady Panthers never had a lead before the buzzer sounded and they were up by one.

Up next, the Panthers saw round two action that put them up against Hoops for Christ (HFC).

Okemah came out from the tip-off and began knocking three-point shots down, easily scoring from the field and stifling the HCF Warriors with a strong defense.

The game was a runaway, and the Panthers were victorious … final score: 69-55.

This led to Saturday, the finals for the tournament, giving both Okemah teams a shot at championships.

The final game for the Lady Panthers was a blowout, and not in favor of the home team. The girls were held to only 32 points the whole game, while Classen SAS put up 81.

“The Classen team we faced tonight is the best team we are going to see all year long,” Seymour said. “It doesn’t matter if we made it to the state finals or anything else, that team is going to be the best we see.”

“We came out pretty strong,” he continued. “We couldn’t keep it up against them, though. We couldn’t make a shot, and they couldn’t miss.”

The coach said it was a much different performance than the first game.

“Thursday, we played against a good Hilldale team, and we just came out on fire, everything was dropping and on defense we were swarming them,” he said. “That game really set the tone from the beginning, so that makes tonight’s loss even more tough on the girls.”

The Lady Panthers scored 12 points in the first quarter as a team, and that would be the most they would have in a single quarter.

Classen held Okemah to only one single point the entire second quarter and only 19 in the last two quarters combined.

The scoring was consistent and high for Classen throughout, scoring 21, 24 18 and 18 in the first, second, third and fourth quarters, respectively.

The Panthers then took to the court to face an extremely fast and consistent Broken Bow team, which handed the Okemah boys their first loss of the season.

Broken Bow’s defense stifled the Panthers’ scorers, save for Cade Dean, who put up his tournament-usual of around 20 or more points with 21 in the final game. The next highest scorer, CD Harjo, contributed 11 points.

Behind that was Jameson Ross with eight, Brayden Lee with six, Wacey Williams and Matt Fullbright each with four and Kurtis Wilson with two.

The game was not a blowout for Broken Bow. The game was close the first quarter and kept its intensity throughout as Okemah played from behind. They were in the game, but couldn’t hold on to any kind of advantage.

When the first quarter buzzer sounded, the game was tied at 13.

The turning point in the game, the deciding factor, was probably the second quarter, which saw Broken Bow outscore the Panthers 21-7, making the score at halftime 34-20.

Unwilling to be deterred, the Panthers fought back, this time outscoring their opponent in both the third and fourth quarters — 16-13 and 20-19.

It was too little, too late. The 14-point deficit incurred during the second quarter was too much to overcome, and the Panthers took the loss with the final score at 66-56 in favor of Broken Bow.

The Panthers dropped 11 three-point shots during the game, maintaining their rhythm as a highly effective shooting team.

Okemah is on the road this week — at Wewoka Tuesday, at Bethel Friday.

HAPPENINGS AT THE GOLF COURSE. Nov 20

Most Deer in Rut Just Days Ahead of Gun Hunting Season