Okemah High School basketball players saw to it that 2019 would start off swell as both the Lady Panthers and Panthers added to their win columns this season, knocking off Okmulgee at home Friday. 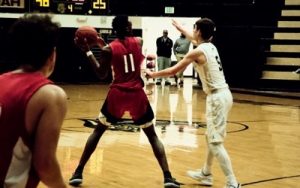 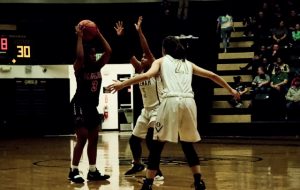 Both teams tout 7-3 records on the season.

The wins over Okmulgee were on the heels of losses to Broken Bow just before the holiday break.

The boys’ team at Broken Bow is ranked #17 in the state in Class 4A, according to OSSAArankings.com. The Panthers, ranked #14 in Class 2A, have faced the team twice this season, both times coming up short.

Despite Cade Dean’s 26 points against the larger, ranked school, as well as the 11 points each from Kaiden Bear and Jameson Ross — both freshmen — plus another 10 points from Wacey Williams, a win couldn’t be grasped that night.

Conversely, the Lady Panthers beat Broken Bow the first time they met this season, winning in a dramatically close contest, 32-31, in their first game of the Okemah Invitational Basketball Tournament earlier in the season.

The second and most recent encounter with that same team yielded negative results for the Lady Panthers before the break as they lost by only two points in another intense, edge-of-the-seat-type close game. The final score was 43-45.

Onward to Friday’s bouts against Okmulgee.

The Lady Panthers — a team that seems oft-involved in close games — had another one against the visiting Okmulgee squad.

With just a little over 4:00 left in the game, Okmulgee edged the Lady Panthers for a one-point lead. A short string of turnovers then led to a three-point lead for their visitors … then a six-point lead.

His team trailing, Lady Panther Head Coach Will Seymour called an ‘icing’ timeout in an attempt to slow Okmulgee’s momentum. It worked … or it revved up the Lady Panthers’ momentum.

Either way, with just about 2:11 on the clock, an offensive rebound and put back cut the deficit to only three.

Aggressive attacks to the basket led to made field goals and a few trips to the free throw line for the Lady Panthers, and before it was all said and done, the home team had taken the lead with just over 0:30 left in the game.

Once they had the lead, it was a clock-management game. The Lady Panthers were victorious, 47-41.

I’m proud of the girls for pulling out the win, though,” he continued. “Tonight was won at the foul line. We put in 22 free throws.”

The Panthers took the floor seemingly with winning the only option.

By halftime, the score was 40-15, giving the Panthers a whopping 25-point lead going into the latter two quarters.

Dean was on fire for much of the game, but especially in those first two quarters — an occurrence that is becoming more and more common.

The junior shooting guard put in 13 points in the first quarter, nailing three shots from downtown, before putting in another eight points in the second — two of those being deep balls. Dean hit the locker rooms at the half with 21 points.

He would score only two more the rest of the game as Panther Head Coach Devin Terry took advantage of his team’s big lead and put reserves in the game, keeping his young team sharp.

They marched past Okmulgee, added a win to the left column and celebrated victory after … on to the next opponent.