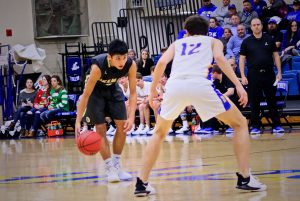 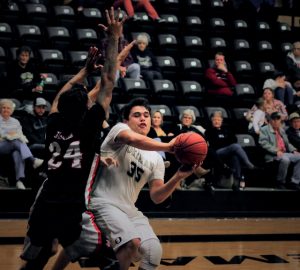 The Lady Panthers ended up losing their first bout in round one, moving them to the side of the bracket that would be bested by winning the Consolation Championship, which the Okemah girls successfully accomplished after winning games in rounds two and three.

Wilson has been stellar this season, for the most part. She is the team’s leading scorer and leading playmaker, making way for other Lady Panthers to make plays and score baskets.

Panther freshman point guard Kaiden Bear is building a pretty striking season himself, especially for a first-year player on varsity. He’s not the top scorer, but he does put in baskets when necessary. More importantly, it seems to Bear, is making plays for his team’s playmakers. That he does consistently night in, night out.

His hustle, aggressive defense and composed, smart offensive tactics were noticed in the Byng Tournament. After the Panthers fell in the final game Saturday to Purcell, Bear was awarded a plaque and recognized for his All-Tournament Team performance.

Panther senior forward (sometimes guard) CD Harjo also left nothing on the table during the Byng Tourney, giving what looked like all he had to be a leader on his team. Harjo is also a player on the team that makes plays for others, quite often for Panther leading scorer Cade Dean, who feeds off Harjo’s aggressive drives to the basket, rebounding skills and passing techniques, all of which oft leave Dean open.

As with Bear, following Saturday’s loss in the finals at the Byng Tournament, Harjo was also recognized for his top-notch performance, also being named to the All-Tournament Team and receiving a personal plaque for his accomplishment.

Both teams were awarded and recognized as a group after the tournament, as well — the girls the Consolation Championship trophy, the boys with second place overall.

Tuesday, January 15 saw both Panther teams win at Holdenville — the boys dominating 60-14. Then, the following Friday, January 18, the Okemah teams hosted Latta High School for their annual homecoming celebration. Unfortunately, the girls lost. The boys held out and saw victory.

Stay tuned to the coming issue of the Okemah News Leader for breakdowns of those games, or visit www.okemahnewsleader.com or find the News Leader on Facebook.