The boys and girls basketball teams at Paden High School recently gave the school reason to celebrate, both finishing as tourney champions after going undefeated in the recent Paden Invitational Basketball Tournament, held at the end of January. 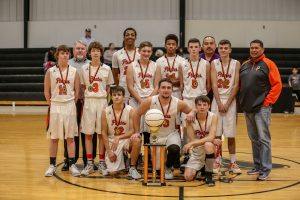 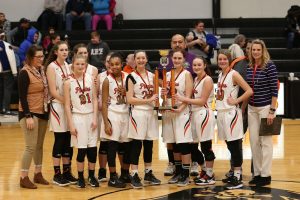 Under direction of Head Coach Sherrie Simek, the Lady Pirates went three rounds straight without a loss, defeating in the first round Class A Prue by eight points, 54-46.

The next round against Weleetka saw a bit more excitement — the game going into an extra quarter after the score remained tied at the end of regulation. The Lady Pirates pulled it out and eventually defeated their opponent by two, 47-45.

The finals saw the girls run away with Class A Union City. A stellar offensive attack paired well with solid defense, leading to a 22-point victory, 53-31, and the crowing of the Lady Pirates as champions of the tournament.

The team and coaching staff gathered for a photo at the end of the game.

The Pirates had a similar tournament outcome, earning three wins in three rounds, under direction of Head Coach Curtis Lee.

First up was Weleetka, which the Pirates dominated, outscoring their opponent by more than 20 points at the end of regulation. The final score in round one was 74-52.

The second round resulted in an even more thorough victory. The Pirates took on Agra, which they toppled by 25 points — final score: 53-28.

The wins in the first two rounds took the Pirates to the finals of the Paden Invitational Tournament where they faced off against Depew.

The game against Depew saw the closest final score of any team that faced the Pirates in the hometown tourney. Paden won the game by only five points, which was in stark contrast to the 20-plus-point deficits they racked up in the first two rounds. The final score was 70-65, and the Paden Pirates — much like the Lady Pirates — were named champions of the tournament.

The coaches and team gathered for a photo to commemorate their tournament victories following the game.

The Paden basketball teams faced Class B Pittsburg Tuesday, February 5. Check the next edition of the Okemah News Leader for reports from that game.