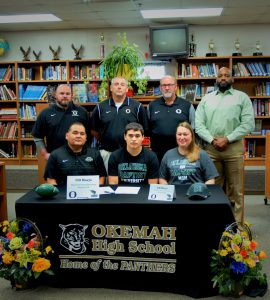 The signing event was held Wednesday, February 6, at the Okemah High School Library.

Attending were coaches that have coached Harjo over the years, as well as family, friends and Okemah Public Schools faculty and administration.

“CD (Harjo) is one of those kinds of kids that is full of spirit and has a great time on and off the field,” Okemah Head Football Coach and Athletic Director Joe Turner said. “He’s a great player, works hard, makes big plays and has always ben a leader for his team.”

Representatives from Oklahoma Baptist University were unable to attend, due to other engagements, but the official signing of the intent letter means Harjo will join the team and begin training shortly after high school in anticipation of his first year at OBU.

The coaches, family, friends and faculty gave Harjo handshakes, high fives and hugs to celebrate the occasion for a senior that has worked hard for much of his high school career, playing just about every sport he could — and while doing so, managing to step up as a leader for his teams.